Tottenham Hotspur’s forward Heung-Min Son revealed who his football role model is, it’s a Manchester United legend who recently hung up his boots.Tottenham Hotspur forward Heung-Min Son is having a blast as a Premier League player, he recently revealed that he has a role model who played at Manchester United for a long time.There are not too many South Korean players who triumph in European football, but Park Ji-Sung is arguably amongst the most successful ones and the player who inspired younger generations from his country where Son came from.The Spurs player talks about Park as a national hero, and dreams of someday winning as many trophies as the former Red Devil did throughout his illustrious career.“He is a legend for me and was one of the guys who influenced us all in a way because he played for also a big team and was a key part of their success,” Son told The Mirror.“Anytime he played in the Champions League he played very well and represented our country in the best possible way.”“I am still in contact with him and he remains my role model because of the kind of human being he is. It is very hard to find a fault in him and if I need to ask something he is always a phone call away.”“I can never underestimate the role he played in putting our country out there with his performance.” 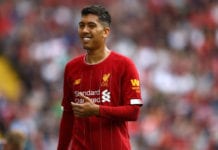 Virgil van Dijk praises Roberto Firmino after Liverpool’s win Andrew Smyth – September 14, 2019 Virgil van Dijk hailed team-mate Roberto Firmino after coming off the bench to inspire Liverpool to a 3-1 comeback win against Newcastle United.Son also revealed what a joy it is for him to be a Premier League player: “For me it’s still a dream to play in the Premier League.”“The journey is an unbelievable one. Playing in England and playing for Tottenham I don’t think I could have asked for more at this stage.”“I am enjoying playing in here every second, every hour, every day. Look back home in South Korea most of the kids wants to play here.”“Maybe some players had it easy but for me it’s a dream and I treat every game as living the dream I had some years ago,” said the Tottenham Hotspur’s forward. On this day in 2005, Park Ji-Sung was unveiled as a United player following his £4m move from PSV.205 games ⚽27 goals 🎯13 trophies 🏆The big-game performer 👌 pic.twitter.com/z7DZAukLhE— Man United News (@ManUtdMEN) July 8, 2018